The sterling silver Buchanan Perpetual Challenge Trophy was awarded annually by the North Pacific Association of Amateur Oarsmen to thewinning senior four rowing crew at the annual NPAAO regatta beginning in 1904. Made in London, England in 1903 at the request of well-known whisky distillery James Buchanan & Co. Ltd and awarded through their agents in Victoria, Radiger & Janion, a crew from Victoria’s James Bay Athletic Association won the cup for the first time at the NPAAO regatta in Portland, Oregon. Of James Bay’s victory, The Morning Oregonian wrote on July 25th, 1904: “The 18th annual regatta of the NPAAO finished here Saturday, proving beyond a doubt that the Canadian style of rowing is better for rowing clubs.”

As the trophy was awarded, the original detachable maple base (see scanned photo) was replaced with one slightly more ornate and with more room for new engraved winners’ plaques. The trophy was last awarded in 1957. A few notable individuals who won the Buchanan Cup over the years include BC Sports Hall of Fame rowing inductee Nelles Stacey, who won the trophy twice as a member of Vancouver Rowing Club fours crews in 1908 and 1909. Members of the Vancouver Rowing Club’s 1924 fours crew that won a silver medal at the 1924 Olympics and was inducted into the BC Sports Hall of Fame won the magnificent trophy in 1923 and 1925. Finally, future BC Lions team president Don Mackenzie was part of a Buchanan Cup-winning team from the VRC in 1934. 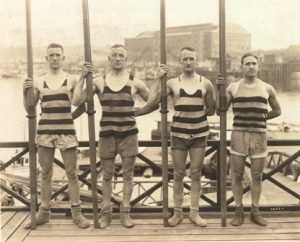 The Buchanan Cup was the very first artifact ever acquired and catalogued by the BC Sports Hall of Fame. To date, over 27,000 artifacts have been acquired for the Hall of Fame’s collection.