On the eve of Super Bowl LIII this Sunday and with his impending induction into the BC Sports Hall of Fame this May, like a rainbow kick splitting the uprights, the timing for an interview with long-time Pittsburgh Steelers kicker Roy Gerela couldn’t have been sweeter. I spoke with Roy this past week by phone from his home in New Mexico and, of course, the Super Bowl was top of mind. 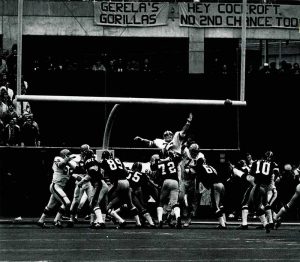 Born in Sarrail, Alberta and raised in Powell River, BC, few people realize that Roy Gerela was the first Canadian to win a Super Bowl when he helped Pittsburgh to a 16-6 victory over the Minnesota Vikings in Super Bowl IX in January 1975. What’s more, to this day he remains the only Canadian who can claim a Super Bowl hat trick, earning two more championship rings with the Steelers in Super Bowl X (January 1976) and Super Bowl XIII (January 1979), both victories over the Dallas Cowboys.

While more well-known teammates Terry Bradshaw, ‘Mean’ Joe Greene, and Franco Harris each played starring roles in those victories, Gerela also made pivotal contributions to the outcome of each game. This came much to the delight of his personal travelling fan club, a crazy group of blue-collar Pittsburgh fans who called themselves “Gerela’s Gorillas” and hung signs mocking opposing kickers from the railing of stadium upper decks around the NFL.

“When they told me they were going to form a fan club for me, I told them to do it for one of the players who really deserved it, like Terry, Joe, or Franco, you know, future hall of famers who were more popular than me,” remembered Gerela this week. “They said, ‘No, we’re going to make you popular because we love the way you kick!’” 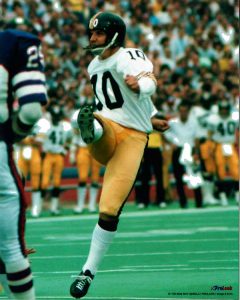 Gerela loved them back. He often met up with the group at local Pittsburgh watering holes to watch Monday Night Football together.

And when he was on the field with one of the longest, most accurate legs in the league, Gerela made his Gorillas pound their chests with pride. An early pioneer of the now predominant ‘soccer’ style of kicking, his kick-offs often pinned opponents deep in their own end and Pittsburgh coach Chuck Noll could count on Gerela as almost a sure-thing on field goals from inside 45 yards.

In Super Bowl IX played at Tulane Stadium in New Orleans, the young Steelers were heavy underdogs to the more experienced Vikings, back in their second straight championship game. Gerela, named to the Pro Bowl that season, missed his first field goal attempt in the first quarter.

“It was played on old worn-out tartan turf,” Gerela said, “and I kind of slipped a bit and it went off to the right just barely.”

On a second field goal attempt later in the first half, he never even had a chance at it, owing to a poor snap that negated the kick. At halftime, Pittsburgh led 2-0. Gerela then inadvertently provided the game’s turning point. On the opening kick-off of the second half, he slipped on the wet turf and blasted an unintentional squib quick that spun into the hands of Minnesota’s Bill Brown who couldn’t hold on. The Steelers recovered the football and pounded into the end zone shortly after on a Franco Harris run. “That kick was a big break of the game,” Gerela remembered proudly. He then kicked the extra point after, as well as another on a fourth quarter Bradshaw touchdown pass to tight end Larry Brown. The Steelers had their first-ever Super Bowl.

“It was a feeling of disbelief, excitement, not knowing what this actually means, the historic meaning of the Super Bowl and how we’re going to go down in history,” Gerela recalled. “Afterward, the team owner, Mr. Rooney came down and gave a speech in the locker room. He said, ‘You’re all so young, you probably don’t know what you just did. We can do it again and again and again for the next ten years if you want to. We will.’”

Darned if Mr. Rooney wasn’t far off. The Steelers won three more Super Bowls in the next five seasons, Gerela part of the next two.

The very next season the Steelers were back in the Super Bowl again, this time versus the Cowboys at the Orange Bowl in Miami. On the opening kick-off, the Cowboys ran a reverse catching the Steelers unprepared and Gerela saved a sure touchdown by forcing the returner out of bounds. He also cracked two ribs on the play and battled the pain the rest of the game while kicking.

“They taped me up really heavy around the ribs and breathing was difficult,” he said. “There was only one kicker, so I had to go out and do it.” 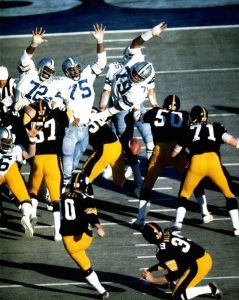 Gerela still managed to connect on one of two extra points (the second hitting the upright) and two of four field goals, both in the fourth quarter as the Steelers battled back to take the lead and held on to win 21-17 for their second straight Super Bowl title.

In Super Bowl XIII, the Steelers faced the defending champion Cowboys in a rematch at the Orange Bowl in Miami. Gerela was once again struggling with injury. The year before he’d partially torn away an abdominal muscle from his pubic bone.

“I could barely raise my leg from the gas pedal of my car to the brake,” he said. “It was excruciating.”

You can imagine what kicking a field goal felt like. Somehow he managed to connect on all five of his extra point conversions in a high scoring and memorable 35-31 Steelers victory that some have called the greatest Super Bowl in history. He also barely missed a 51-yard field goal that hit the left upright and mirroring Super Bowl IX again slipped on a fourth quarter kick-off slicing another inadvertent squib kick that the Cowboys fumbled and led directly to the Steelers’ final touchdown. Gerela set several Super Bowl records during this game including most extra points made in a single game (5) and a career (8).

How does a kicker kick on one leg in the Super Bowl, you ask? Good question. “Adrenalin flows and you give it all you have and that’s what I did,” he said proudly this week. “Whatever it takes.”

That’s also how you win three Super Bowl championship rings. On his return home in May for his BC Sports Hall of Fame induction, we look forward to reliving more memories of Roy Gerela’s remarkable NFL career.