1979 Vancouver Whitecaps: It Took a Village to Win the NASL Soccer Bowl

Legendary Province sports columnist Jim Taylor writes: “The Vancouver Whitecaps have become the greatest phenomenon in the history of Vancouver sport—bigger than the Grey Cup BC Lions, bigger than the Miracle Mile.” Taylor wasn’t exaggerating. Over a magical ten days, the Whitecaps defeated the star-laden New York Cosmos in the North American Soccer League semifinals and followed that up by knocking off the favoured Tampa Bay Rowdies to win the NASL Soccer Bowl. And the ‘Village of Vancouver’—as ABC broadcaster Jim McKay famously described our fair city—went wild.

The Whitecaps were classic underdogs, lacking ‘name’ players, but were colourful, oozing character, fiercely determined, hard-working, and tight as family. The team’s one true star, Alan Ball, summed it up best: “This is a team, not a collection of stars. A team.” All of BC fell in love with these Whitecaps. The line-up for tickets to the first leg of the Cosmos series stretched four city blocks. The parade route upon their return from the championship was packed with as many as 150,000 delirious fans. Many of the players became legends, as loved today as in 1979: Bobby. Carl. Wee Willie. Lofty. Buzz. Roger. King Kevin. Their coach, Tony Waiters, became the greatest in Canadian soccer history. It really did take a village as everyone contributed to what Vancouver Sun soccer writer Dan Stinson called “the greatest sports story Vancouver has ever seen.”

To mark the 40th anniversary of arguably the most significant North American professional championship won by a BC team to this day, we opened the It Takes A Village special exhibition on May 31st in conjunction with the Whitecaps MLS match that evening. Sixteen members of the 1979 team were honoured in a pre-game ceremony and post-match a fan event was held in the new exhibit here in the BC Sports Hall of Fame where Whitecaps fans could meet and even share a pint with their 1979 heroes. It was an unforgettable night, stories and memories passing back and forth among the two hundred or so in the room as crisply as the Whitecaps moving the ball on the field in their prime. A few stuck out for me personally: 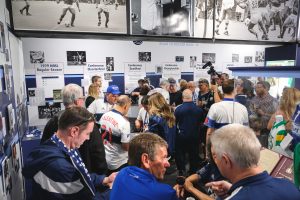 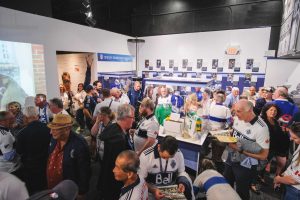 One follow-up story is worth noting as well: we made contact with Coquitlam-raised Tampa Bay Rowdies player Wes McLeod for the exhibit and he generously loaned us his Rowdies socks and Buzz Parsons’ Whitecaps jersey worn in the Soccer Bowl. He and Buzz exchanged jerseys following the match. Buzz paid us an unexpected visit just recently and while touring the exhibit, he mentioned that he had Wes’ Rowdies jersey still and wondered if Wes would be interested in trading jerseys back after the exhibit is over. I put them in touch with one another shortly after and it appears these two jerseys will remarkably be returned to their owners next year—41 years after being first exchanged. 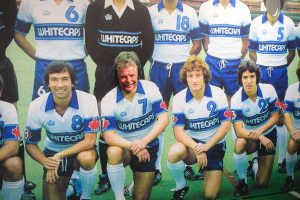 If you’re a Whitecaps or soccer fan, the It Takes A Village exhibit is a must-see. Take a seat on Empire Stadium plank seating and watch original footage from the 1979 season, as well as a mini documentary on the Soccer Bowl. Gaze at an amazing collection of photographer Kent Kallberg’s photos from that season blown up to near life size. Snap a photo of yourself as a member of the 1979 Whitecaps in a life-size team photograph. Read up on what each of the 1979 team members went on to do in the years after the Soccer Bowl on the alumni wall. Hear original Whitecaps PA announcer Phil Toombs introduce the exhibit, his booming voice as strong as it was in 1979 echoing from Empire Stadium’s speakers. Relive the highlights of the run to the championship on the history wall. Plus the exhibit is packed with impact artifacts galore. Highlights include: 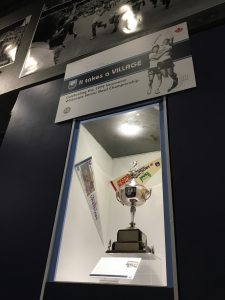 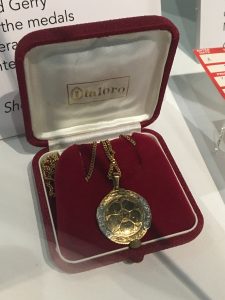 If you were lucky enough to experience the Whitecaps’ 1979 Soccer Bowl championship first-hand, come relive those memories and maybe learn a few inside stories you didn’t know. If you missed out on 1979 the first time around, the It Takes A Village exhibit takes you inside an unforgettable team of underdogs who wrote one of the greatest stories in BC sport history.