VANCOUVER, BC- The first Canadian woman to win an Olympic gold medal on home soil will be appearing at the BC Sports Hall of Fame February 17th to celebrate the 10-year anniversary of the 2010 Vancouver Olympics. Attendees will have a chance to get their picture taken with the gold medal athlete on an authentic Olympic podium and check out some amazing artifacts in the newly refreshed Vancouver 2010 Gallery. 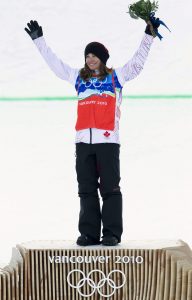 Maelle Ricker holds up the her flowers as she stands on the winner’s podium after her gold medal win at the women’s snowboard cross final at Cypress Mountain in West Vancouver, B.C., Tuesday February 16, 2010, at the 2010 Vancouver Olympic Winter Games. THE CANADIAN PRESS/Sean Kilpatrick

Maëlle Ricker will be at the BC Sports Hall of Fame from 12pm-1pm and photos opportunities are available on a first-come, first-serve basis. Special displays and interactive Olympic themed exhibits will also be featured at the event taking place on Family Day—with tickets to the event being free of charge.

On February 16th, 2010, Maëlle Ricker did what no other female Canadian had done before: She cruised to gold medal glory in women’s snowboard cross after winning her quarter and semi-final heats. A native of North Vancouver, Ricker is a world-renowned snowboarder, with a world championship gold and two X Games golds to her name in addition to her 2010 Olympic gold.

Visitors at the event will have the opportunity to see and interact with the newly refreshed Vancouver 2010 Gallery featuring the largest collection of 2010 Olympic artifacts in Vancouver. Authentic athletic equipment like American Olympian Shaun White’s snowboard and Canadian skeleton racer Amy Gough’s race spikes are just two of the many exciting additions to the Gallery – Maëlle Rickers snowboard is also on display. After checking out the new displays, attendees will have the chance to slide on a pair of iconic red mittens, take a photo with an Olympic torch, as well as standing atop an authentic Olympic podium.

Children can emulate Canada’s golden boy Sidney Crosby as they practice their slap-shots in the participation zone and deepen their knowledge of the fast-paced Paralympic spots of sledge hockey and goal ball. Kids can also make their very own Olympic medal and torch in the arts and crafts corner. What’s more, visitors will have the chance to lay their hands on an authentic Olympic medal from the 2010 games.

The BC Sports Hall of Fame will open its doors to the public from 10am–5pm with the event running from 11am–3pm. Tickets to the event are free of charge and can be acquired here:

About the BC Sports Hall of Fame
The BC Sports Hall of Fame celebrates extraordinary achievement in BC sport history and inspires future generations to make their dreams come true. Each year, a diverse audience of visitors from around the globe are educated and enthralled by the collection of 27,000 artifacts and 100,000 archival documents representing 150-years of sporting accomplishments in British Columbia. Through the Hero in You Youth Education Programs, the BC Sports Hall of Fame reaches over 6,500 youth across the province, advancing its mission of building outstanding community legacies by honouring the past and inspiring the future.